These bread pakoras are stuffed with cauliflower. The coating is made with chickpea flour (besan or gram flour) and they are fried until crisp and golden. Traditionally Indian pakoras are filled with spicy potatoes. I’m not a huge fan of potatoes. Probably the only vegetable what I have a slight dislike for. So instead of the usual filling I stuffed them with curried cauliflower. Hubby said it was the first time he tried this version.

Cauliflower worked well with the pakoras. I meshed the veggies a bit and added a little bit of the chickpea batter to it to make it sticky as the potato filling. I used white toast bread but you can make the recipe with brown bread slices too.

Bread pakora is usually a snack in India which is served with some masala chai, but sometimes I need to satisfy hubby’s craving for spicy breakfast. Bread pakoras are good option for a heavier brekkie. Best way to secure hubby’s inner peace is to make his tummy happy.

I hope you enjoy! 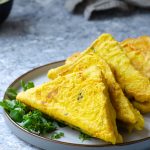 When family is baking and I can just click😁 Me

I hoped for some snow for Christmas but seems like

Hello dear friends! I'm getting into the Chrismas