To be honest this spicy vegan millet porridge is much more like rice milk than a porridge but it could sound weird to call it rice milk while there is no milk.  Anyways I’m a huge fan of it.

I have lived in couple of countries and I tired rice milk in different variations. In Hungary we call it ‘tejberizs’ and top it with compote mostly. The Greek ‘rizogalo’ is served with cinnamon. My big favourite is the Indian ‘kheer’ which is usually thinner but the cardamom, chopped almonds and raisins make it divine. I could finish buckets of kheer before I became vegan and switched to plant-based diet.

This time I was experimenting with millet instead of rice. It is dairy and gluten-free as well.

I visited Sri Lanka in January, the only souvenirs what I picked up were Ceylon tea and of course cinnamon. It tastes very smooth and warming, so I feel I have some treasure in my pantry. I cooked some fusion version of spicy vegan millet porridge. Sri Lankan cinnamon, Indian cardamom and cloves.  Fresh ginger for some heat, bit of Bourbon vanilla for a touch of softness. Apple for freshness, cranberries for tanginess and almonds for some crunchiness. After this fusion dance of tastes in the morning the winter cold can’t upset me for today.

It’s a great breakfast but it can be served as dessert too! 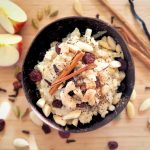 Hajnal To be honest this spicy vegan millet porridge is much more like rice milk than a porridge but it could sound weird to call it rice milk while there is… Breakfast millet porridge European Print This
Serves: 3
Nutrition facts: 200 calories 20 grams fat
Click on Stars to Rate Recipe → 5.0/5 ( 2 voted )

When family is baking and I can just click😁 Me

I hoped for some snow for Christmas but seems like

Hello dear friends! I'm getting into the Chrismas